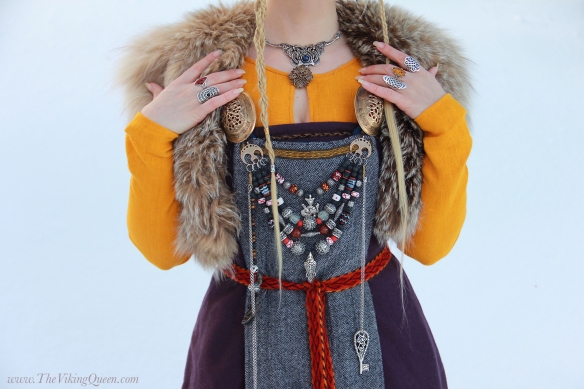 I am all about the Viking Boob Bling, so I made it a ‘hashtag thing’.
The more rows, the merrier. Would love to add more rows for that Pagan Peacocking Extraness. 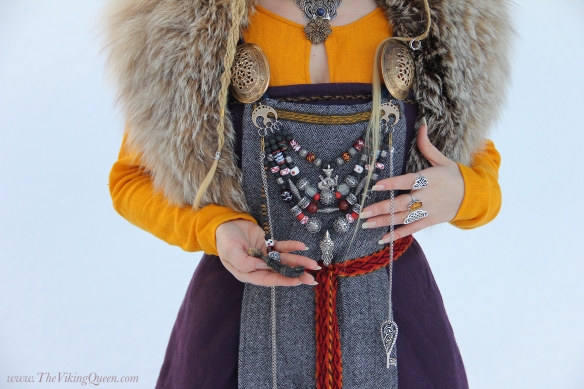 I have quite a few different Viking Boob Bling rows, and this is my bead combination of choice at the time. Behold! Switching up the colour scheme and bead combinations to match my Viking Garb is something I enjoy doing while watching TV.  Man, I wish I could present a more magical background activity, and tell you that I ask the gods for creative help in a special ceremony while chanting forgotten songs before engaging in the bead threading process… but that is simply not the case. (Keep in mind that I might do those things – just not whilst threading beads). Every piece of jewelry and every bead that I have means something special to me – on a totally random note -This reminds me of a really cool lady I met this summer – who said that she talked to her beads as she crafted them, and that they all had different personalities. She said that she threw away the nasty behaving beads because she didn’t like bullies, and then she cackled like a madwoman. That lady was cool. I hope I meet her again.

On a random note – I have been looking for a silver pair of turtle brooches for what seems like forever.. This might be a shot in the dark – but please contact me if a collaboration/promotion sounds interesting. Yes, I am shamelessly putting it out there.

Wishing all of you a glorious weekend. I’m off to spend the last bit of this month’s student loan on food. Haha, The struggle is real! Who can relate… 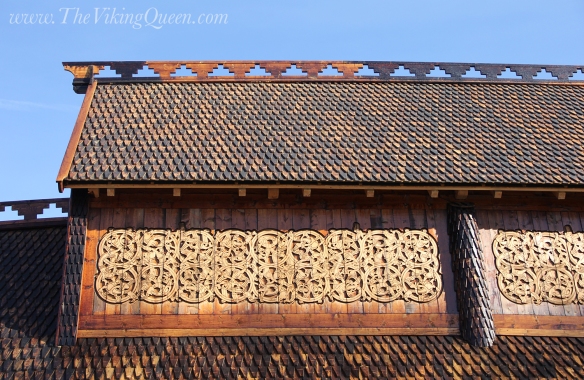 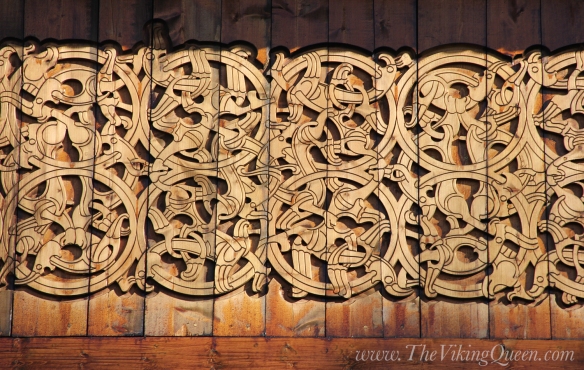 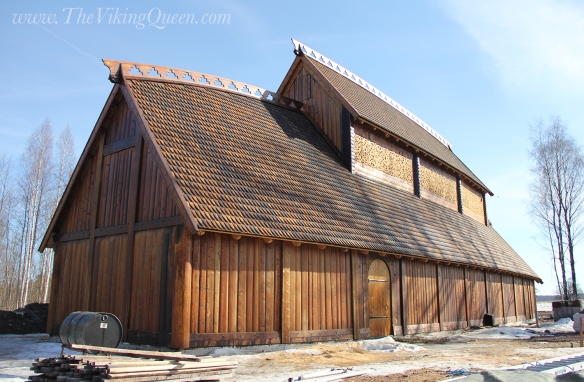 This is pretty much what my dream (long)house looks like. If I was filthy rich, I would build a reconstruction like this one right away! These photos were taken a few years ago, under the construction of the Gildehall in Horten. I was there long before they opened the Hall for the public eye and managed to snap these photos. I think it looked pretty amazing this way, as I am quite the fan of wood – but I must say that the blackish paint it sports now looks badass like Hel. I am going to Midgardblot this year too, and that will be a good chance to take quite a few photos of what it looks like these days. Photographing at the site will probably happen before that, though. My my iron horse (*cough* mercedes benz) and I frequently pass the area on our way to visit my parents and I often make a stop at Borrehaugene to breathe some norse vibes.

so tell me;
Are you going to Midgardsblot this year? 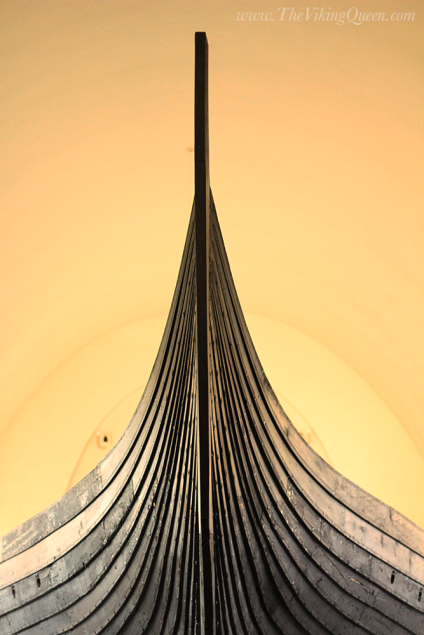 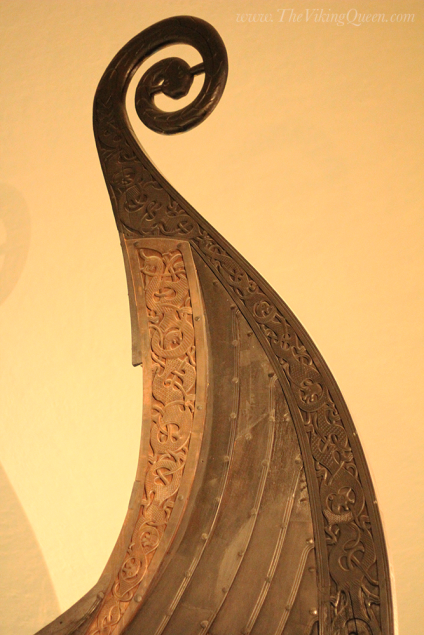 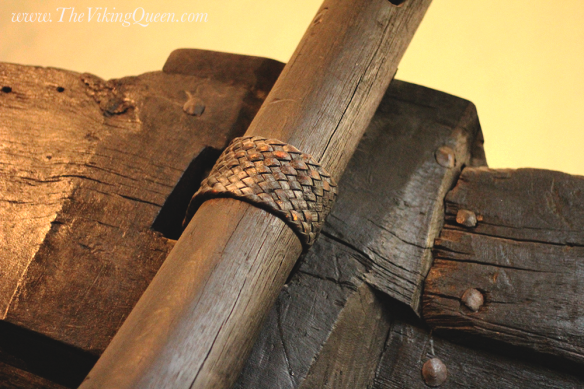 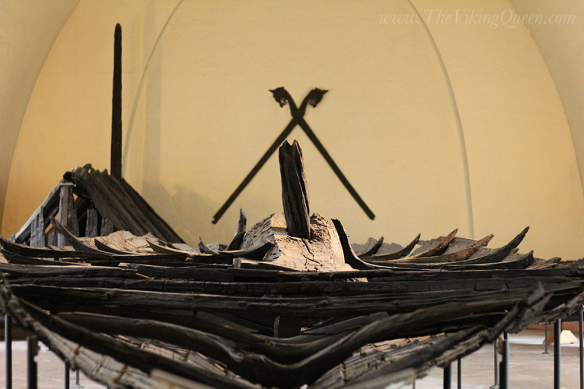 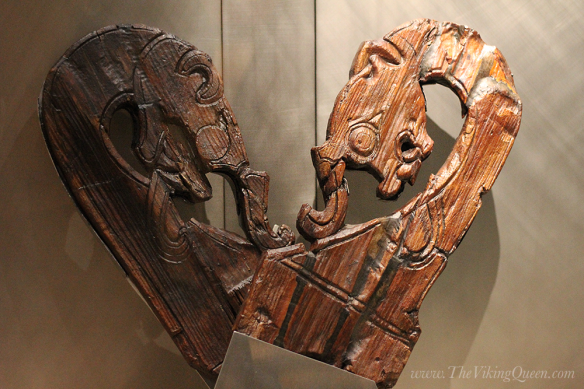 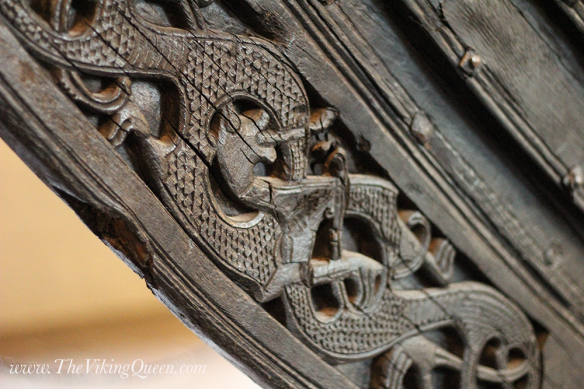 Is is possible to be in love with an object? Or rather, in love with a with a ship? I believe I am. I’ve visited this museum countless times, to the point where it’ starting to get… awkward. You see, I’ve stood there in awe – glancing at The Oseberg ship in all its’ glory – my heart pounding heavily – my body trembling with admiration. And… It might just be me, but I think it is noticeable. At least by the guards (lol!) Like I’ve said before, guards “always” follow me around when I stroll through museums. The reason might be that I’m a big goofball with a huge smile. Not the average museum guest, but that one weirdo who is a bit too ‘happy go lucky’. 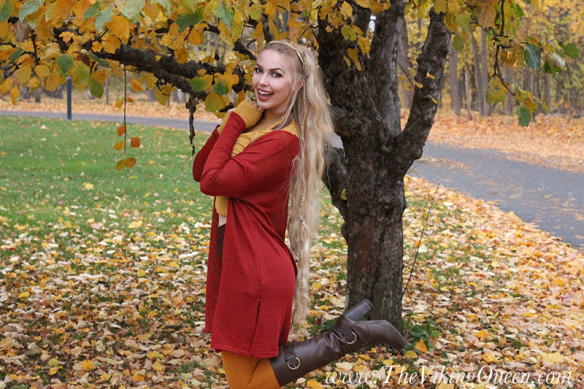 This photo was taken outside the museum. Yup… I am clearly in love with the ship. Heh.

“The Oseberg ship was built in western Norway around the year 820. It is made of oak. Each of the strakes overlaps the one below and they are fixed with iron nails. Each side of the ship consists of 12 strakes, or planks. Below the waterline, they are only 2-3 cm thick, which makes the ship’s side very flexible. The two upper strakes are a little thicker. The deck is made of loose pine planks. The mast is also of pine and was between 10 and 13 metres high.

In the year 834, two prosperous women died. The Oseberg ship was pulled ashore and used as a burial ship for the two ladies. A burial chamber was dug right behind the ship’s mast. Inside, the walls were decorated with fantastic woven tapestries and the dead women lay on a raised bed. The women had a number of burial gifts with them. There were personal items such as clothes, shoes and combs, ship’s equipment, kitchen equipment, farm equipment, three ornate sledges and a working sledge, a wagon, five carved animal heads, five beds and two tents. There were fifteen horses, six dogs and two small cows. Investigation of the skeletons showed that the older woman was about 70 to 80 when she died, probably of cancer. The other woman was younger, a little over 50. We do not know what she died of.

Both of them must have held a special position in the community to have been given a grave such as this; were they political or religious leaders? Who was the most prominent person in the grave? Was one a sacrifice, to accompany the other into the kingdom of the dead? Were they related? Where did they come from? The two women from the past remain a mystery, but continued research may tell us more.” 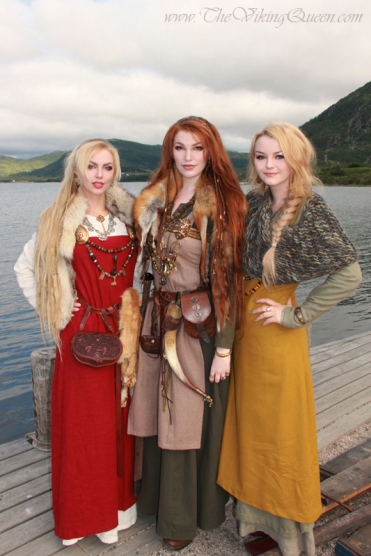 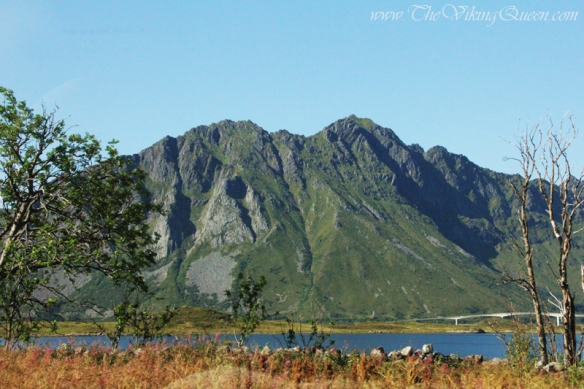 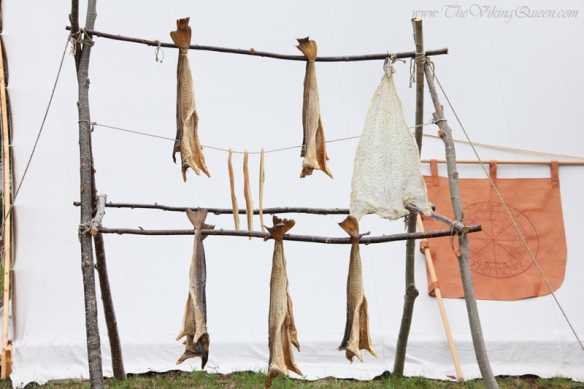 Dried fish is the best snack in the whole world.
This is a protein bomb delicacy from the North 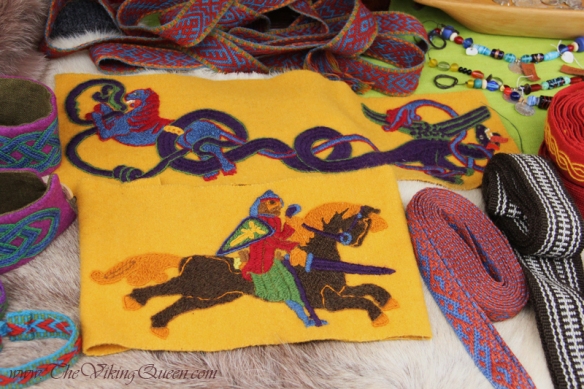 The best thing about Viking Markets is that you get to see so much beautiful craftsmanship. It is great fun to meet so many lovely and talented men and women who are willing to share some of their knowledge, and have a crafty viking chat. 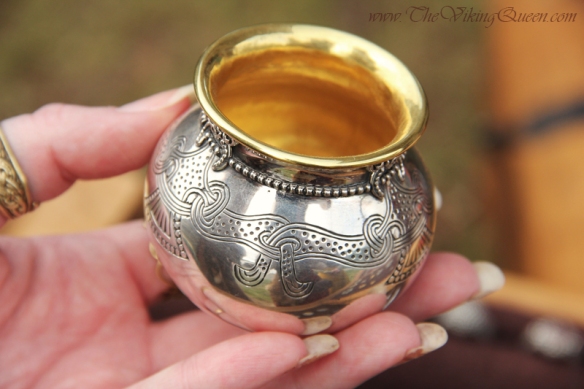 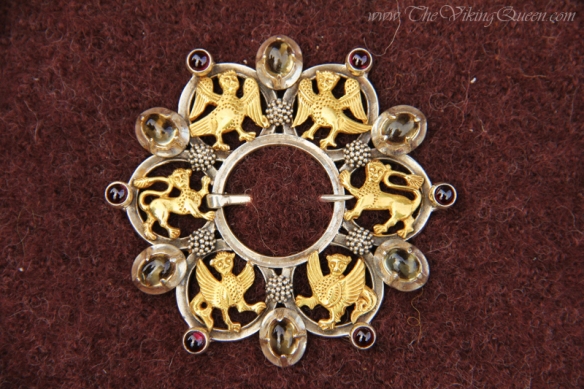 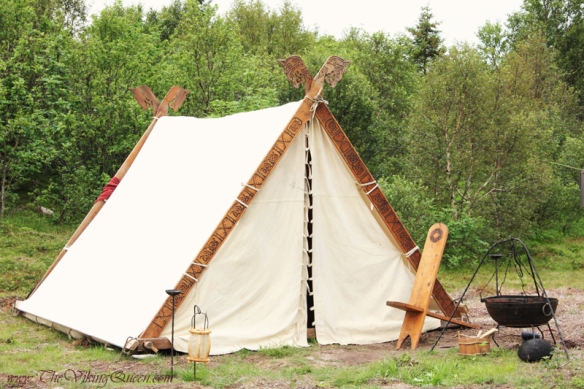 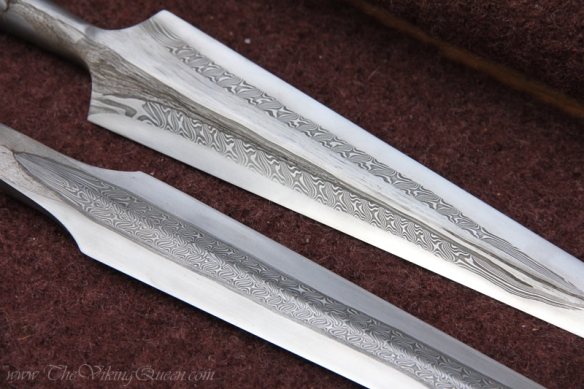 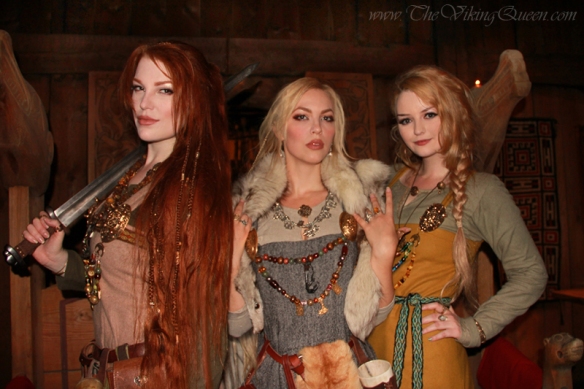 Whenever it feels like you are alone in in this weird, modern world, Remember this:
True friends will remain true to you no matter what happens. 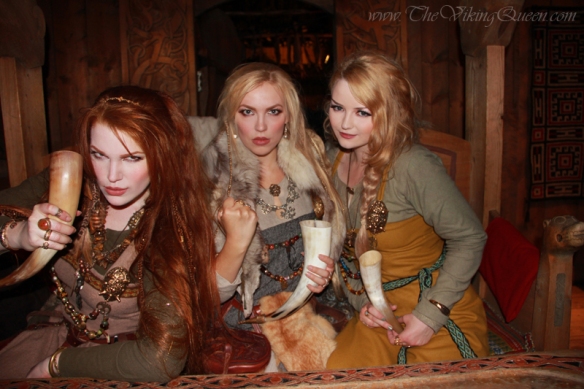