Decided to take up a project that I started some time ago; experimenting with and creating ‘berry makeup looks’. A few years back I did an all natural look where I painted my entire face with blueberry makeup (eyebrows, eyes and lips). This is today’s lip colour – created by mixing blueberries and raspberries with honey, and dabbing it on in three layers. So…This is the colour that came of that, Tadaaa! Those of you who have been around for some time know that I love modern makeup and that I like to go batshit crazy with it. Every now and then it’s fun to experiment with whatever is at hand, though. Wild berries have quite potent colours and I have a few more “experiments” coming up 😉 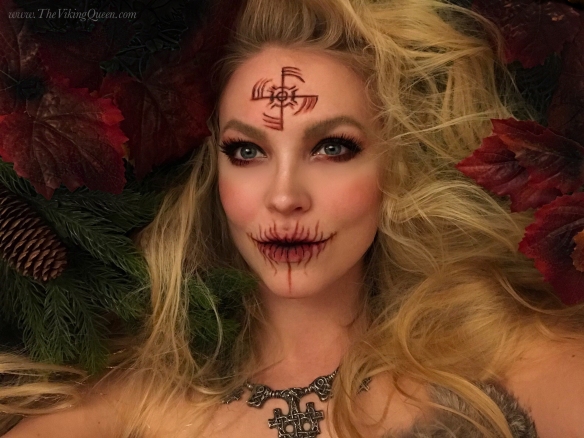 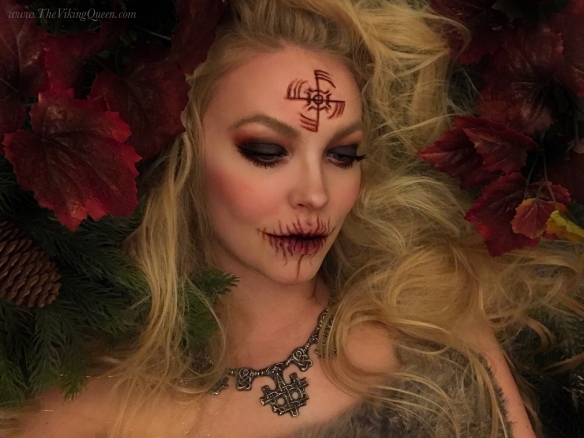 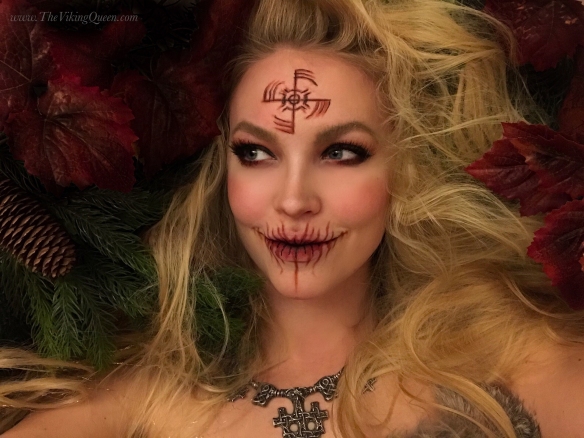 A little on the side of my usual content, but hey…! Those of you who follow me on instagram have probably seen this look already, felt like posting more pics of it nevertheless. I love experimenting with makeup, especially when incorporating ancient norse symbols and runes. It’s my thing. The icelandic magical staves, Galdrastafur, were my main source of inspiration for this specific look. Usually, these kind of ideas spring to mind when I am doing something extremely boring, or even when I am dreaming. To me, Putting on makeup is a hobby, a ritualistic act, and meditation -all at once-. On a higher level, it is my attempt at making everyday art that ties the ancient heritage with the Urban way of life.

I wore coal makeup at Oslo Medieval Festival. I imagine that this is something the vikings possibly could do, as coal gives quite a dramatic look! There shall be further experiments with this natural “smokey eyes” look. And oh, all clothes are made by my handmaidens and She.

(Here is a link to something I wrote about vikings and use of makeup some time ago
https://thevikingqueen.wordpress.com/2013/12/06/makeup-and-vikings/ )

Dear readers! Many of you have been requesting this, and now it is going down; I will be making a series of photos with makeup made straight from nature! My goal with these upcoming photos is to show you a couple of ways to use 100% natural and authentic makeup . Here is my first attempt at blueberry! Everything in these pictures – my lips, my eyes AND eyebrows have been coloured with the blueberry “potion” that I made for my pancakes today. I was very surprised and happy to see that my lips turned out this dramatic. . 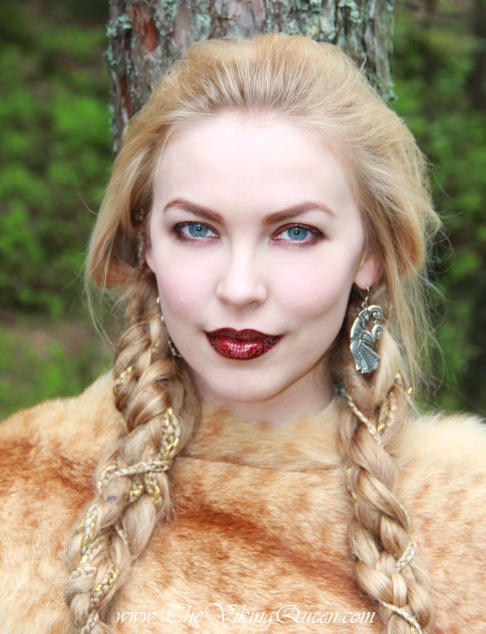 A close-up
Photography by Eirik

– Frozen Blueberries (boiled. No water added)
– Honey (one tablespoon)
Applied to my face with a brush

As the title suggests, this blog post will be about vikings and makeup. But keep in mind that lack of respect is something that I do not take lightly. It has nothing to do with makeup or no makeup, really.

As you may well know, there are many pictures of me in different viking related groups on facebook. Let it be said that I have never granted permission for such use. Every now and then, I get emails from fans who want to make me aware of these things. Now, this happens so often that I cannot spend more time on having these photos taken down. If I ever get tempted to view my “stolen” photos in these groups, I often regret it because of the comments that people have left under them. Don’t get me wrong, Most comments are nice, but some are not so nice. The not so nice ones are most of the time about my use of makeup – questioning my authenticity, my dignity and my title(!). This upsets me, as I have never even claimed to be a reenactor, this is simply who I am, this is my personal image. Sure, I could go down to the same level and point out various things about the very same people who wrote shit about me, questioning their authenticity on different terms, but that is simply not my style.

Even if I was a reenactor, why should I not “be allowed” to wear makeup?

In my opinion, the whole ‘wearing makeup is not being authentic’ thing is just too silly. Both men and women have worn makeup for thousands of years – in different cultures. Bling on clothes, bling in hair – bling everywhere. The Vikings travelled all around the world, and brought back many treasures such as silk garments and jewelry. Why would you ever think that they wouldn’t bring makeup with them? Vikings were vain people who liked to look good, just as people do today. The human race is not as inventive as we like to think. The world is turning – changing, and changing back again.

“Any culture who carried ear spoons and combs on their belts, had immaculate hair-dos for battle, and used hair dye/bleach surely put colour on their faces… come on!” ~Ásvör Álfsinsbarn

Most reenactors are very cool people, and I respect their work. Still, there are those who want sources on EVERYTHING. And if there is none, then” it surely cannot be authentic”. I refuse to believe that people did not have their own personal style back in the good old days too. We see how creative they were with everything else, don’t we?

Let’s take a moment to remember that not all things have been discovered, not all graves have been opened. We do not know everything. There is mystery in history and none of us can claim to know the whole truth. Either way, one thing is for sure – I will not sit around and wait for someone to give me a green sign to do what I want. I have my personal style and I will rock it until I am dead and all the way into Valhalla. Come, watch me dance, No one will ever be able to change me, or dictate me. Really, do you think that your opinion about my looks are so important that I should change myself to meet your expectations?
Hail to the no!

Victoria Gugenheim just left me these words on my facebook status about the subject:

Now, I think that the reason why some people choose to rant about makeup is simply because they are feeling threatened, and feel the need to bring others down to make themselves feel better. I do not feel this need, I only feel the need for mead. (ps – stay clear of too much mead, it is strong stuff, even for fellow heathens) 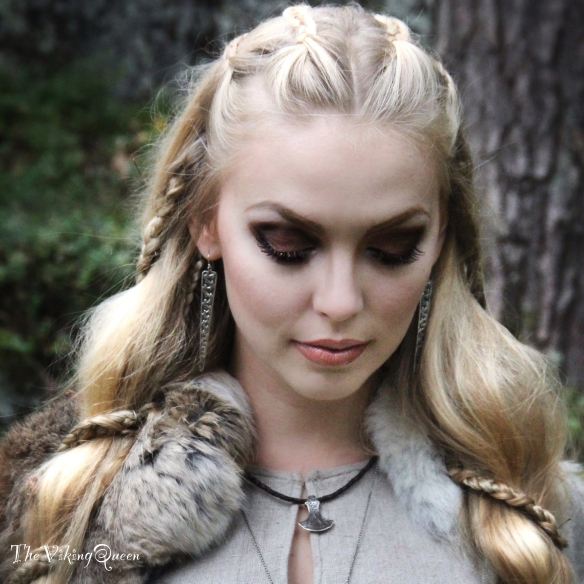 I thought the viking environment would be an including one, not about pointing fingers at each other in order to “be better than each other”. Let’s be respectful towards each others’ personal styles.Be wild shieldmaidens and don’t let anyone try to tell you what to do with your appearance, because fuck that shit, and let’s have fun.