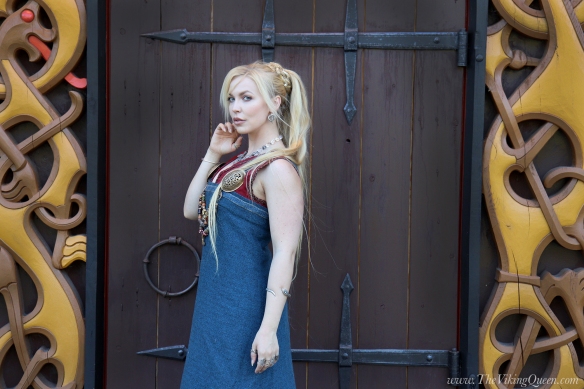 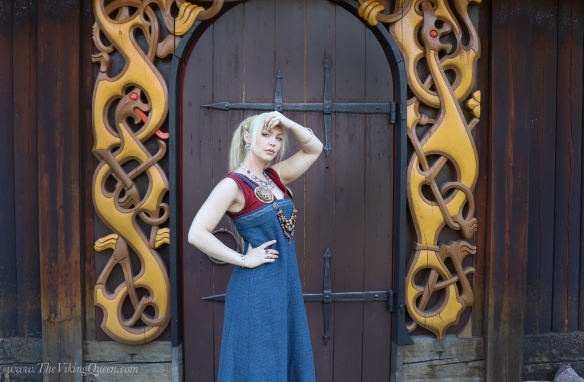 This Majestic Viking Hall is a reconstruction of a great mead hall from the Viking Age. Imprints of such halls were found in 2007 by archeologists, which strengthened Borre’s position as a centre of power, even before the Viking Age. Archaeological theories, and even the epic of Beowulf has been taken into account in the reconstruction- simply because we do not know what these halls looked like. This excites me the most about the viking age- the mystery and the art. On the exterior, shingles have been carefully laid and tarred, and Beautiful wood carvings adorn the upper walls and the entrance.

This is a popular spot to shoot photos for modern day vikings. After pillaging the market, I had to pose like the queen I am;) The viking garb is something I made a few years ago, and I made it according to the Oseberg style, a long train apron dress in diamond twill. The underdress is not based on archeological evidence – as it has no arms…! I know, shocking…. *rolls eyes* According to some russian women and…men(!!) on instagram I might as well be naked simply because I am showing my shoulders. Bahahah! I know ,what the actual fuck? On another note, I doubt that vikings covered up that much. They worshipped fertility gods and goddesses for fucks sake. Let’s take a moment to appreciate that<3

For more info about the Gilde Hall, click HERE

What is do you love the most about the Viking Age?

13 thoughts on “Borrekaupangen, Sudden photoshoot in front of The Gilde Hall”